Nii Ayi Charles Armah played almost all traditional drums of his ethnic group, the Ga people of Accra, Ghana, by age 8. After joining the “National Dance Company of Ghana”, in 1993, he rose to Assistant Master Drummer rank. As one of the two Master Drummers, he played the leading drums of each region within Ghana. Since 1993, his work with The National Dance Company has carried him to England, France, Denmark, Germany, Poland, Indonesia, Zimbabwe, S. Korea, and the United States. In 1998, Charles was featured on the ceremonial Fontomfrom drums in a performance for President Clinton during the President’s visit to Ghana. He played with the great master drummer Obo Addy, for many years, in the world beat band Kukrudu and continues to perform and provide community workshops with the traditional drumming and dance troupe Okropong. 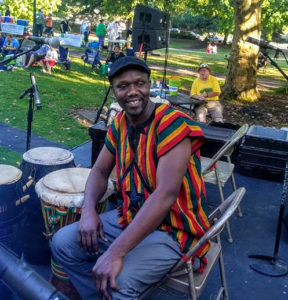